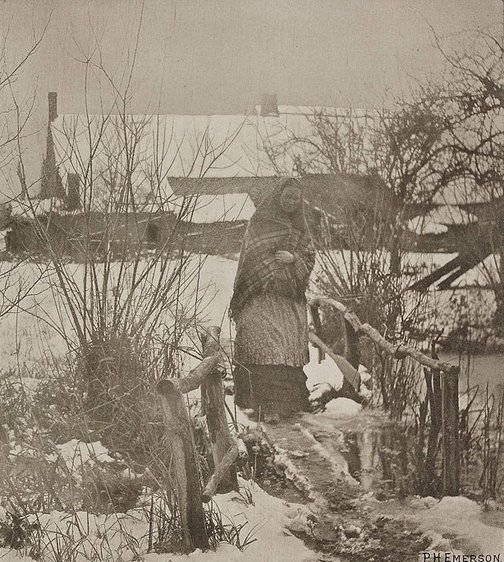 Through both his photographs and theoretical writings, Peter Henry Emerson became one of the most significant figures of early modern photography in England. From the time he joined and exhibited with the Photographic Society of Great Britain in 1882, he became deeply involved in the polemical aesthetic debates for an artistically relevant form of photography. Dismissing what he saw as the overriding sentimental concerns which dominated pictorial practices of the day, Emerson instead introduced a scientifically-based vision for artistic photography which was closely aligned to schools of naturalism in painting. His 1889 publication ‘Naturalistic photography’ espoused his belief in a practice based on the close and ‘honest’ observation of nature. To achieve this Emerson proposed a theory of selective focus where the camera’s lens should mimic optical vision, avoiding extreme sharpness and rendering its subject with degrees of a softening focus emanating from the composition’s chief point of interest. While Emerson warned against the fuzzy extremes of this model, the soft-focus aesthetic would become a hallmark of pictorial photography.

Emerson’s principal works are a series of photographs studying life and labour in the East Anglian landscapes of England. The images were originally published in book form and accompanied by descriptive text. Given this format, there is a strong emphasis in ‘Pictures of East Anglian life’ on utilising the camera’s potential for social commentary by portraying, as the text states, the ‘terrible struggle for the bare necessities in life’ of the East Anglian rural workers. For example, the caption to ‘A slippery path, winter scene, Norfolk’ tells of ‘the young mother crossing a slippery ice-glazed plank which bridges the frozen dyke’ to call her sick working husband in for dinner, with her children also ill and suffering from the freezing weather. The picturesque qualities of the snow-blanketed scene are thus transformed by an understanding of the perilous existence of a working community whose lives are commanded and consumed by the conditions of their landscape.

‘A stiff pull’ 1886-87 (AGNSW collection) was regarded by Emerson as one of the best plates in ‘Pictures of East Anglian life’, and it too is indicative of the unromanticised picture of the struggles of everyday life of this series, making them early forerunners of modern documentary photography. With its tight composition of receding diagonals, the brooding tone of the sky and the shift from the sharp focus of the soil, which almost engulfs the blurred movement of the worker, ‘A still pull’ successfully conveys the intense efforts of a rural labourer.