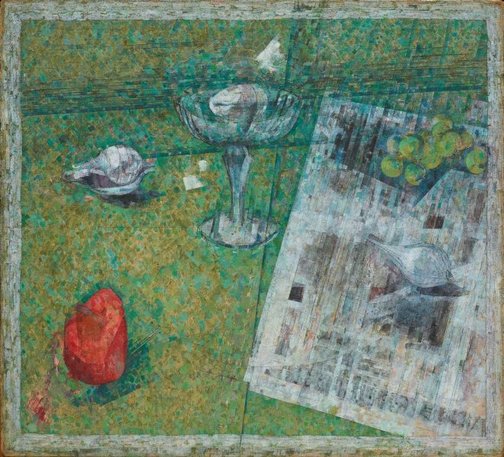 "What largely interested me exterior to actual painting is the French approach to mathematics and Indian writings in poetry and philosophy….My impulse or motive in painting other than the actual pleasure of the creative process is in the belief that a Unity is not just a block, solid. It is not either parts or separate things strung together in for instance the manner of necklace….In my painting if I have achieved anything of satisfaction or revelation (it) would lie in the explorations and initiatives in a matter existing between these two poles, in and inside the Unity but always confirming to its special nature."

So wrote Godfrey Miller to Alan McCulloch in 1954, suggesting the premise of his practice as one infused by philosophy, esoteric thought systems and a mathematical ordering to explore the metaphysics of being. Miller sought to visualise a cosmic unity through the realms of material objects; to tell of the commanding geometry of the universe in the dimensions of the everyday. His dissecting abstraction, one built on a geometrical deconstruction and rebuilding of the world, became his aesthetic vehicle for unlocking the visual mystery of things.

Miller's '(Objects at night)' 1948-51 is a beautifully realised statement of Miller's complex aesthetic of inherent contradictions. The work's shimmering surface, of segmented, crystallised fractures ultimately constructs a composition of a tightly unified whole with objects sitting separately in space but also collated in their movement. While the objects refer to Cézanne's volumetric solidity, they too seem weightless in space. Despite a composition of exacting balances, all appears to be in a state of flux.

The inference of night illuminates this landscape of forms with a brilliant green glow, a colour in darkness, evoking a mystery of things that would be deflected in daylight. The work's painted white border suggests a contained, dazzling energy.

Miller is one of Australia's finest abstractionists, and a key influence on a generation of painters during the 1940s and 1950s, through both through the example of his painting practice as well as his profession as teacher at East Sydney Technical College (now the National Art School). By fusing a sense of mysticism with mathematics, philosophy, poetry and aesthetics, he produced one of the most distinct oeuvres of artists of his era.

oil, pen and ink on canvas

Purchased with funds provided by the Gleeson O'Keefe Foundation 2015

Browse other works by Godfrey Miller 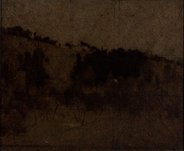 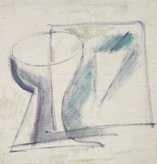 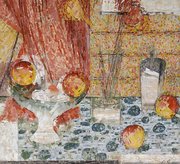