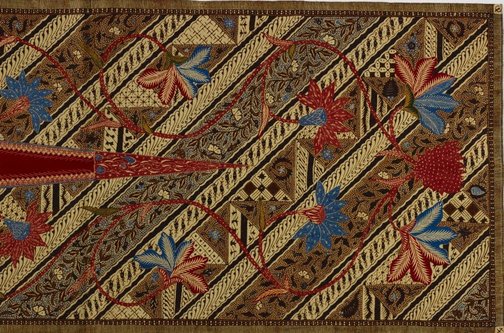 This type of batik cloth is commonly referred to as 'batik tiga negeri' or three-country batik because it demonstrates a union of Chinese, Dutch and Javanese cultural stylistic preferences and was generally produced in the three towns of Lasem, Pekalongan and Solo. Each town was known for its colour specialisation, red in Lasem, blue in Pekalongan and brown in Solo and so each textile would have the specific colour applied in the respective town. The three-country batik was an expansion of the ‘dua negeri’ or two-country batik which combined the motifs and colours of the north coast industries with that of the court batik of central Java and only really became a viable business venture after the introduction of the train line between Semarang and Solo in 1862. While beginning as an entrepreneurial experiment in a climate of increasing competition, it was largely the Chinese and Arab traders with contacts in the various towns who were able to develop both a profitable business and a very unique aesthetic. This cloth, authored by Tjoa Oeymho of Kedungwuni, constituted by the three colours, red, blue and brown and expressive of both ‘batik cap’ (stamped batik) and ‘batik tulis’ (hand drawn batik) techniques clearly encapsulates the ‘tiga negeri’ style and modes of production prior to the second world war.