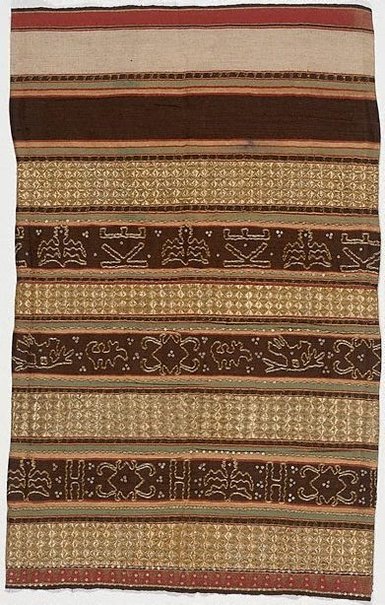 This tapis skirt, composed of two pieces, is elaborately decorated with gold-wrapped threads and the additional designs ('sasab') created by the threads used to attach (couch; 'cucuk') the metal to the cloth. It also has floral and animal motifs and variations on geometric shapes in the bands between the gold panels. The letters KE and H are also prominent in these bands. While the use of letters is not uncommon on tapis skirts, usually it provides information in the form of a message or a poem. Sometimes, as here, the weaver used abbreviations. Without information about the family to which this tapis once belonged and the weaver who made it, however, the meaning of the letters and their placement on this tapis will remain unknown. The extensive use of gold-wrapped threads indicates that this tapis came from an elite family, and would have been used in traditional dances. The weft threads, which are not visible, are blue, and the warp threads are brown, red, ochre, green, and cream. The combination of colours and the decoration suggest that this skirt was made in northern Lampung for a woman belonging to the Pepadon social group.