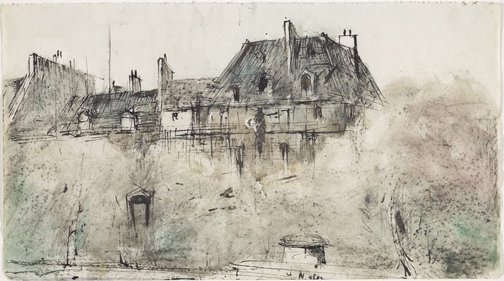 In 1966-67, Lloyd and Marjory Rees visited Europe for the third time. In October 1966 and again in March 1967, Rees was in Paris, and this and two other small drawings [also in the Gallery's collection] are from a sketchbook used during the trip, which was one of his most rewarding experiences of the city. On earlier visits in 1923 and 1953, he had felt the experience of the First and Second World Wars had cast a blight over the city. But, in 1966, he found 'confirmation of my early idealism. Great areas are now the gleaming city I imagined it to be... All over the city buildings are being restored even in narrow bye [sic] streets.'
(Rees letter to Alan and Jan Rees, 31 October 1966, Rees family collection)

The pleasures of this visit is reflected in the concentrated clarity of theses sketches, which depict a pale grey day, shiny as polished pewter. The artist's palette of soft colours suggests that the season is autumn or
winter, and an atmosphere of misty light surrounds the solid inked-in shapes of bulidings, boats and bridges and dissolves the masses of foliage in the avenues of trees.