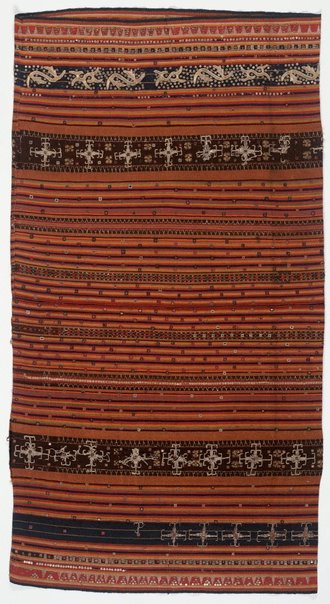 This tapis has mirrors and/or glass ('kaca') and sequins inside within borders and bands and so is called Tapis Kaca Bekandang. The narrow bands of decoration are made of different coloured warp threads, as well as couched ('cucuk') gold-wrapped threads, and sequins. The wider bands not only include sequins, but also the gold-wrapped thread mounted on paper-card in swirling shapes. These latter motifs may loosely imitate patterns found among the Dayak in Borneo, which would have arrived in Lampung via the extensive trade networks found across Southeast Asia. The triangles at the bottom of the skirt are a popular motif known as "pucuk rebung" (bamboo shoot) and are found on tapis and batik cloths. The blue, red, orange, green, brown, and beige warp threads completely cover the brown weft threads. The tapis comprises two pieces of cloth joined together across the middle of the skirt. Similar pieces were used by people following the Pepadon social system in the north and central regions of Lampung (M.L. Totton, 'Wearing Wealth', pp.28-32).