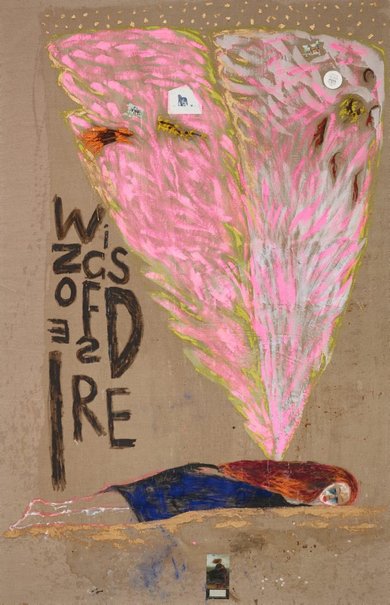 In her own words, Jenny Watson’s pictures are ‘urgent passionate spare necessary psychological simple’.1 The urgency comes from her desire to explore imagery drawn from interior demands, fears and fantasies. It has led to recurring subject matter: the woman, the cat, the horse, the bottle, the house. These elements tell stories about the self but are not completed narratives. The stories, with their roots in the unconscious mind, break up into fragments, as though received over a bad telephone connection.

The end result is a compelling combination of naivety and sophistication (not an easy thing to do), as well as vulnerability and defiance, power and powerlessness, qualities Watson sees as part of the struggle to be validated as a woman artist in the context of modernist ideals (over 30 years of modernism’s scorched-earth strategy of abstraction wasn’t favourable to Watson’s kind of figurative work). Her sketchy application of paint – often on coarse fabric cut directly from a roll, red velvet, taffeta, even horse feed bags – has an expressive reticence that seems to mirror the effect of figures in dreams. But this use of poor-quality materials and challenge to conventional technique also suits Watson’s pop-critical attitude to high art preciousness.

Text too plays a role, and has that tactile quality of painterly calligraphy. ‘I feel like when my father used to dry my hair’, reads one text with a tall-eared female figure dressed as a Playboy bunny with a long, plaited ponytail. Jokey, elusive, often bitterly funny, these scenarios mix light and darkness in ways that keep us off-balance. Sometimes the letters are reversed or float away from the word; sometimes they are shrunk or elongated, evoking the experiences of Alice in Wonderland, which in the mid 80s was one of Watson’s key subjects. Borrowing from the Lewis Carroll books, Watson sees her own alter-ego as the artist child/woman, who, despite all her mind-bending transformations, remains the same passive participant. Watson also keeps trying out versions of her signature, as if to fix her identity and anchor this flux.

The title ‘Wings of desire’ refers to a Wim Wenders movie about unseen angels above a divided city, who are privy to human dramas. Co-written by Peter Handke with music by Nick Cave (a one-time student of Watson’s in late 70s Melbourne), the film is an upbeat parable set in soon-to-be unified Berlin. Damiel the angel has the melancholy yearnings of those already dead: the desire to touch, taste, feel, be whole again. In Watson’s picture the angel is lying flat on the ground asleep, growing two extravagant wings of pink and yellow. The wing also looks like a heart, a butterfly (and therefore, according to the Greeks, a soul). Horse imagery – a recurring theme in her work – has rich psych-ological, mythic and personal associations: Watson admits that as a teenager she was ‘horse crazy’.

Watson’s images are simple but uncanny and compelling. With every picture you get a sense of a profoundly experienced image, be it terror or comfort. Her art does what good poetry is capable of doing, with the same power of implication in a small space.

Browse other works by Jenny Watson 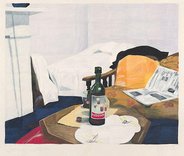