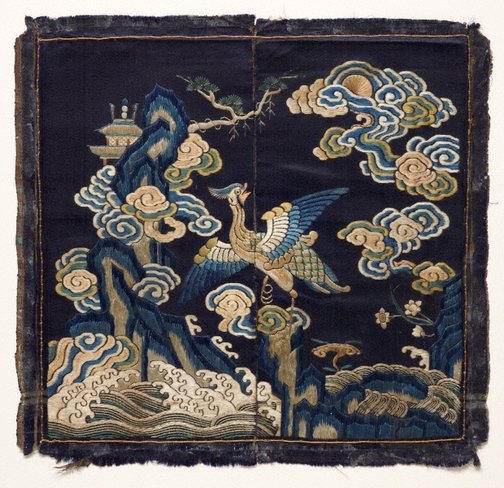 Civil rankings were based on the passing of demanding official examinations. Civil badges consisted of nine ranks each represented by a different bird, with only a couple of changes of bird types over the two dynasties. Military examinations were based on physical feats rather than literary and the rank badges are rarer. For example, towards the overturn of the Qing, military rank badges in particular were burnt to conceal identification. Military badges consisted of animals representing rank. During the Qing rank badges were generally worn by an official, his wife or wives and unmarried sons and daughters (Garrett 37).

This badge depicts a rare mandarin duck insignia, worn by a civil official of the 7th rank. The duck is shown about to alight from a rock which is surrounded by waves. It turns to look at the sun which is the symbol of the emperor. Included in the scene is a mountain, pine tree and a pavilion – the home of the Immortals. This complex badge, worn at the front due to the fact that it is split, is a significant example of a rank badge of the 18th century.