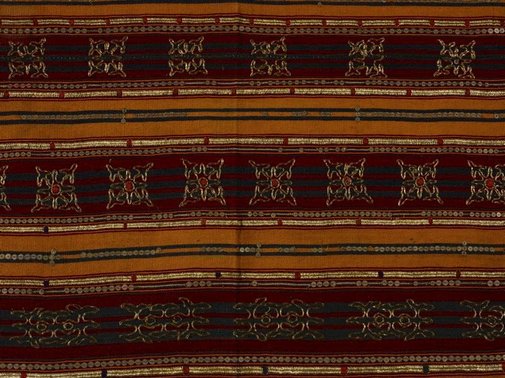 Formed of two pieces of cloth, this tapis skirt has extensive decoration. The warp-faced plain weave is covered with sequins attached with the French knot embroidery technique, couched ('cucuk') coloured felt, rick-rack braid, little woven squares of purple wool, and gold-wrapped threadwork on paper-card bases. The design also comprises eight-pointed stars and tri-partite motifs of interconnected parallel lines. The panels of gold-wrapped threads have been couched onto the base cloth, and the couching threads were sewn in a zig-zag pattern. The latter decorative technique is called 'sasab'. The warp threads are blue, red, ochre, beige, and cream, and the weft threads are brown. This tapis may come from people following the Saibatin tradition in the northwest of Lampung.