The genius of Salvator Rosa 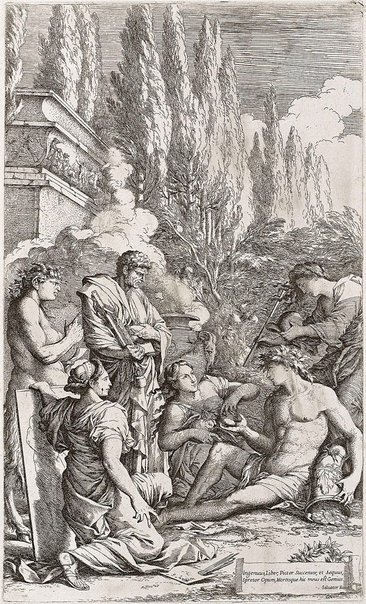 ‘Sincere, free, fiery painter and equable, despiser of wealth and death, this is my genius.’ So proclaims the scroll in the lower-right corner of this etching, Rosa’s most emphatic expression of his artistic philosophy. As well as being a painter and etcher, Rosa was also an actor, musician and poet, famous (some would say infamous) in his day as a flamboyant and outspoken artistic personality who believed utterly in the dignity of creative genius and the freedom of the artist to pursue his own path, irrespective of the demands of patronage or convention at large.

Early biographers, such as Filippo Baldinucci, who knew Rosa well, described his fiery character and burning ambition, and how he often made enemies with painters and potential patrons alike. The radically original nature of Rosa’s views on the necessary independence of the artist and the primacy of creative inspiration anticipate ideas that were to become current with the Romantic movement of the late 18th and early 19th centuries. Indeed, by this time Rosa had come to be seen as a precursor of the Romantic hero – a reputation no doubt nurtured by myths of his upbringing among bandits in his native Naples and of his fighting there against Spanish rule. His landscape paintings of wild and mountainous scenery, populated with travellers and banditti, were highly appreciated in 18th-century Britain and helped define the Romantic sublime in external nature. Horace Walpole memorably noted when crossing the Alps in 1739: ‘Precipices, mountains, torrents, wolves, rumblings – Salvator Rosa.’

More than a landscape painter, Rosa desired to be known as a learned painter of histories and allegories. After almost a decade in Florence, an experience that left him dissatisfied, Rosa returned to Rome in 1649 and began working on a series of large-scale figure compositions with serious philosophical and moralising themes. In the early 1660s he produced a number of classicising etchings, which developed the erudite subject matter of his paintings and reflected the artist’s interest in Stoicism, with its scorn of fortune and the worldly life.

The genius of Salvator Rosa illustrates the artist’s philosophical motto virtually to the letter. The artist/genius figure is depicted as a youth crowned with ivy and reclining in the pose of a classical river god; his left arm rests on an overturned cornucopia spilling coins and jewels, however he appears uninterested in these riches. Likewise, the cemetery setting, with its cypress trees, prominent tomb and large vase decorated with a goat’s skull and emitting smoke, suggests the artist’s indifference to and repudiation of mortality.

Surrounding the youth are five allegorical figures whose attributes represent various facets of genius to which Rosa aspired. The youth offers his heart to the personification of Sincerity, represented by the woman holding a dove. Directly behind him, Liberty places a cap on his head. In the left foreground, the kneeling woman holding a panel with a figure sketched on it is Painting. The philosopher-type wearing a toga and gesturing to his book and balance represents the idea of equability and fairness. In stark contrast to all of them, a coarse satyr (herself crowned with ivy like the main figure) represents the baser instincts. More importantly, satyrs were linked with satire, a mode of writing at which Rosa excelled, mercilessly holding up human vice and folly to scorn and ridicule.

Browse other works by Salvator Rosa

Salvator RosaThe crucifixion of Polycrates circa 1662231.1979