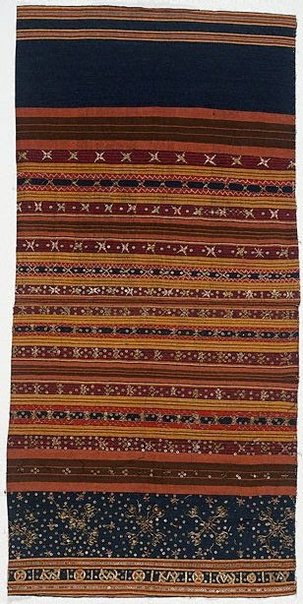 This tapis skirt is composed of two sections joined together horizontally at the centre of the textile. The cloth has red, ochre, indigo blue, brown, and burnt orange warp threads and blue weft threads. The colours are visible because the textile is warp-faced, meaning that the warp threads dominate. The decoration consists of red silk threads, gold-wrapped threads, and felt that have been attached to the cloth with couching ('cucuk') stitches. There are also sequins attached with French knots – a form of embroidery, and gold-wrapped threadwork and threads wrapped with gold wire arranged in patterns on paper-card bases. The upper part of the skirt has less decoration to make it easier to wrap around the waist when worn. The stripes and star patterns are standard for this type of tapis. Similar pieces come from people following the Pepadon tradition, one of the two main social groups, in central and north Lampung.