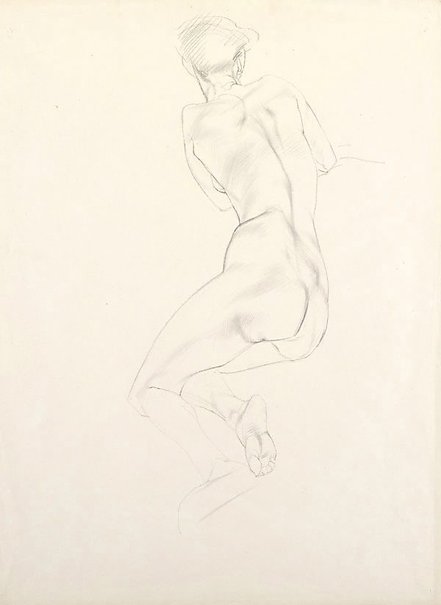 Adelaide Perry studied in Melbourne at the National Gallery School, where she won the Travelling Scholarship in 1920, allowing her to further her studies in London at the Royal Academy, and in Paris. She settled permanently in Sydney in 1925, where she became an influential teacher at her own art schools, the Julian Ashton School and later in life, at the Presbyterian Ladies College, Croydon.

Perry made many life drawings; this enigmatic, linear nude is typical of her exceptional draughtsmanship. She emphasised the importance of working from life, impressing upon her students that "… the only real painting is from the subject – anything else could be false" [Adelaide Perry to Hazel de Berg, 1965, oral history transcript, National Library of Australia]

Hendrik Kolenberg, The portrait and the nude: Australian drawings from the collection, Sydney, 1990. cat.no. 62