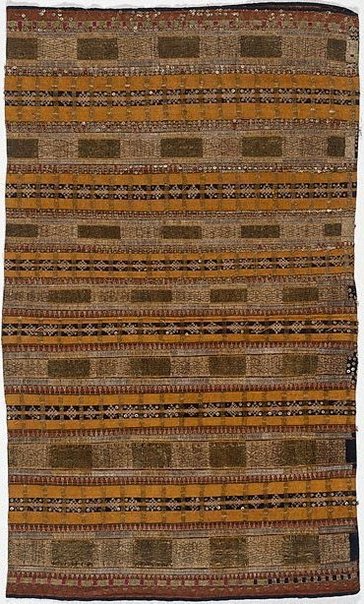 This tapis skirt is probably a Tapis Balak, which means Large or Arrogant Tapis. The name comes from the bold geometric design and the extensive gold wrapped threads. The names of patterns can vary, however, so this skirt could also be Tapis Kaca, which means Mirror Tapis, a name that comes from the heavy use of sequins. As is typical of Sumatran tapis skirts, this piece is composed of two sections joined together. The colours of the warp threads are brown, blue, and ochre, and the weft is brown. The skirt is decorated with sequins, many of which are attached with the embroidery technique called French knotting. Purple and green silk threads, in addition to the gold- and silver-wrapped threads, have been attached to the surface of the skirt by the decorative technique of couching ('cucuk'). The plain threads used to hold the gold-wrapped threads in place have been sewn in patterns, a decorative technique called 'sasab'. The stripes and geometric forms are popular decorative motifs on tapis cloths.