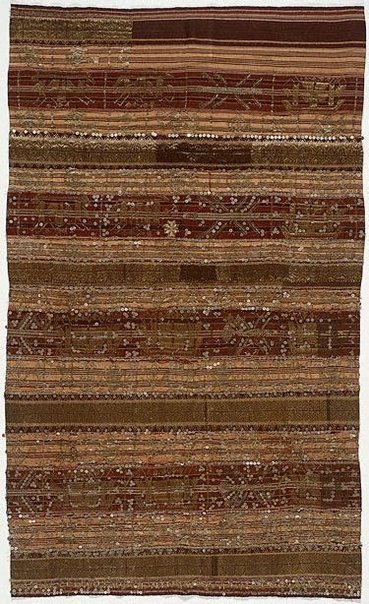 This tapis skirt is composed of two pieces of cloth stitched together, a typical format. The cloth is warp-faced plain weave with red weft threads and multi-coloured warp threads, including brown, red, purple, pale yellow, pale green, and cream. The dark hues suggest that the piece is from northern Lampung. The skirt is decorated with designs of gold-wrapped thread. The gold-wrapped threadwork and gold wire coiled around threads are arranged into patterns and couched ('cucuk') onto paper-card bases attached to the base cloth. The patterns created by the couching threads are called 'sasab'. The extensive use of gold-wrapped thread is common on tapis skirts, as are the images of people and boats that refer to the maritime trade so important for the Lampung economy in the past.