The velocity of drops: surgical ward 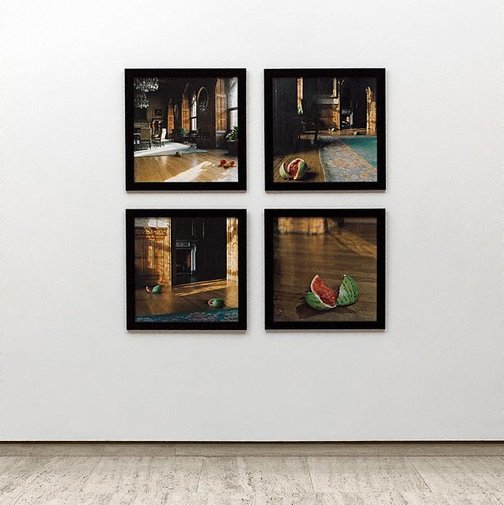 Christine Borland bases her work upon research and includes found objects and materials as a way of engaging memory and bodily associations. Her research embraces a wide field, including scientific thought and museological methodology, which she uses as a means to explore the many aspects of human existence. She has often spent time in places such as hospitals, museums or historic houses where she discovers as much as possible about the history and current functions of the place before creating a personal response to the site. While the intellectual side of the work is fundamental, her work has an ethereal beauty and reveals often rarely discussed aspects of human behaviour.

‘The velocity of drops’ is an on-going series of photographs which include shattered watermelons. This series is set in a 19th-century stately home, Mount Stuart on the Isle of Bute off the west coast of Scotland, where Borland was artist-in-residence in 2003. During World War I the Stuart family offered their home for use as a naval hospital and for three years war casualties were treated while the family continued to reside there. The titles within this series indicate the house’s transformation during this time: the library became the X-ray room, the conservatory the operating theatre, the drawing room the surgical ward and so on. The melons lie as if testament to some terrible accident; they inevitably seem to hold the possibility of representing the frailty of the human skull that protects the vulnerable stuff of our thoughts within. Francis Bacon would have it that spilt brains are very beautiful but for most of us it is more acceptable to see the aesthetic value of a smashed fruit.

Browse other works by Christine Borland