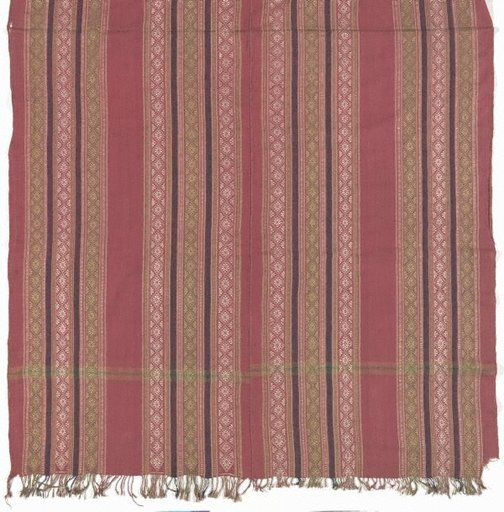 This is a Phu Tai textile, probably from Laos. The Phu Tai were resettled from Laos into central Thailand by the Thai. Because this piece was collected in Luang Prabang in northern Laos in the 1880s, mostly likely it was produced by a Phu Tai woman prior to that resettlement event. The textile itself is made of red silk with green and gold weft stripes and white, gold, and indigo-blue warp stripes. The supplementary warp stripes are yellow and cream. The fringes are twined. As usual, the blanket is composed of two separate pieces of cloth joined together down the centre, typically stitched by hand, but in this case, by machine. The joining of two narrow pieces of cloth indicates that the fabric was woven on a back-strap loom (instead of using a wooden frame, the loom is held taut by a strap that passes around the weaver's back).