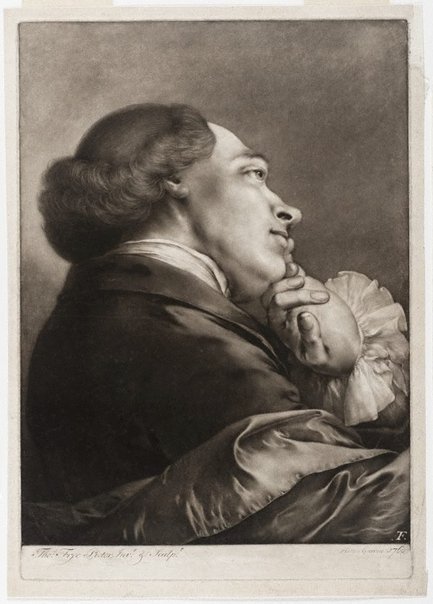 Mezzotint (which literally means half-tint) is a technique especially suited to reproducing the broad effects of oil painting. It was invented in 17th-century Holland and soon spread to England where it was perfected during the following century, becoming the most widespread method for reproducing paintings – portraits, above all (see page 101), but also more complex compositions (page 93). The peculiarity of mezzotint was that it was the first non-linear printmaking process, allowing the engraver to work in a much more painterly manner, from dark to light rather than from light to dark.

To prepare a mezzotint, the copper plate is roughened all over with a spiked tool called a rocker that covers the surface with minute pits and indentations. If inked in this state the plate will print a solid velvety black. The engraver then creates gradations of light from white to grey by smoothing areas of the textured surface with scrapers and burnishers so that the image emerges from the blackness. Where the roughened plate has been burnished away completely and wiped clean of ink it produces pure highlights.

The English and Irish mezzotinters were the leaders in the field and their impeccable technique made their prints highly prized by collectors. Indeed, mezzotint was so closely associated with British printmaking that it became known in Europe simply as la manière anglaise.

Among the most arresting mezzotints of the 18th century are the 18 life-sized heads made by the Dublin-born artist Thomas Frye towards the very end of his life. These prints are doubly remarkable because they are not interpretations of another artist’s designs but were conceived by Frye for the medium as original works of art.

We know nothing of Frye’s early life or training in Ireland until his arrival in London around 1735 where he is recorded as a portrait painter and miniaturist. These activities were presumably not very lucrative and his career took a new turn in 1744 when he became a co-founder of the Bow porcelain factory. He was manager at Bow until 1759 when poor health, caused by the furnaces, forced him to retire.

After leaving Bow, Frye decided to apply himself to mezzotints, announcing a subscription in the Public Advertiser on 28 April 1760 of ‘Twelve Mezzotinto Prints, from Designs in the Manner of Piazetta [sic], drawn from Nature and as large as life’. The set was priced at two guineas with subscriptions closing when 200 sets had been taken. He also produced
a second set the following year titled Six ladies, in picturesque attitudes, and in different dresses of the present mode.

Frye’s source for these diverse portraits was the series of celebrated presentation drawings by the Venetian artist Giovanni Battista Piazzetta. While Frye undoubtedly worked from real people sitting as models, only one of them – Frye’s own self-portrait – is named. As a whole, the mezzotints belong to a tradition of fanciful head studies, created for their striking poses, expressive physiognomies and dramatic lighting effects, rather than as commemorations of the sitter. Some of the plates display poses of such daring seen at such close range and from such unnerving angles as to be almost indecorous by the standards of 18th-century portraiture. Yet they were clearly admired by the painter Joseph Wright of Derby, who appropriated Frye’s figures in his own compositions.

Man facing right with head tilted and finger to lip

Charles Russell, English mezzotint portraits and their states: catalogue of corrections of and additions to Chaloner Smith’s “British Mezzotinto Portraits, 1926, p 114. no 14

Browse other works by Thomas Frye