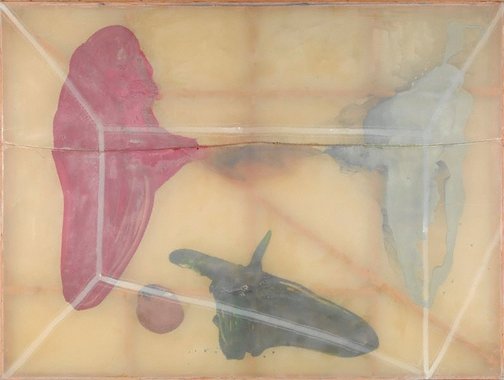 In the 1970s Sigmar Polke abandoned painting for photography, much of which he took while travelling in Afghanistan, India and Morocco. During this time he explored the alchemical qualities of photography, exploiting chemical staining and optical accident, which came to create the appearance of strange presences and emanations within the pictures.

When Polke returned to painting in the 1980s he maintained his interest in these alchemical qualities of materials, experimenting with pigments and materials that were quite toxic and using mediums that could flow and stain the canvas just as he had done with photography. He made some of his images by exposing photographic paper to radioactive rocks, producing strangely glowing images of ethereal presence. He also began using transparent fabrics and building complex stretchers that remained visible and thus became part of the composition.

Within his broad range of found imagery and material compositions, ‘Meteor II’ is a relatively abstract painting. The fabric is soaked in resin making it even more transparent but also giving it the feel of a veil of substances, something the Australian artist Janet Laurence has made great use of. The shapes or emanations are painted on the back and show through as shadowy forms that seem to loom from beyond the surface. Over the top he has drawn a linear structure whose spatial coordinates are actually impossible in a mineralised, hence luminous, white paint. This structure not only works off the rectangle of the canvas which completes the figure but has an edgy relationship with the shadowy geometry of the stretcher bars behind.

The large figure at the base of the composition takes the form of a goat’s head, not literally but it has an unmistakable chance likeness like an image seen in the clouds or in the coals of a fire. The goat could almost be a spectral return by Joseph Beuys, who made many drawings of goats in his early years as an artist and who saw this as a sacred animal with mystical, possibly diabolic powers. The shadowy forms on either side of the painting virtually mirror each other, although this is not obvious at first because they are such different colours. The one on the right seems more like a stain; the one on the left has more decisive brushstrokes that define its shape. Each of these amorphous blobs has protrusions at ‘waist’ height that point across the space as if reaching out, seeking to touch across the divide while a connecting stain spreads between them. It could be read as a ghostly yearning or an erotic encounter of ectoplasms.

Purchased with assistance from the Mervyn Horton Bequest Fund 2004

Browse other works by Sigmar Polke