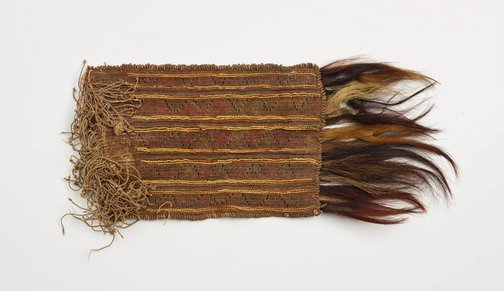 Across the highlands of New Guinea, loincloths were worn in former times by boys of a certain age and men, suspended from the waist through a belt made from wide bands of bark, or from woven and plaited waistbands.

This fine example consists of a central panel of woven plant fibre string, interwoven with striking flashes of yellow orchid stems, and with a lower fringe of 14 pig's tails, and would have been worn by a young Simbu boy who had reached a certain age and left the care of his mother to join the men of his village, living in the men's house until his marriage.

© Simbu (Chimbu) people, under the endorsement of the Pacific Islands Museums Association's (PIMA) Code of Ethics