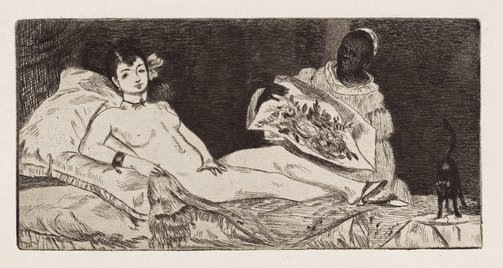 Manet was taught printmaking by Alphonse Legros, whose style he emulated in his early etchings. From 1860-1882 he produced 73 etchings, as well as 26 lithographs. Manet’s graphic works are part of the so-called Etching Revival – that great resurgence of etching witnessed in France in the 1860s and 1870s. He also collaborated with the ‘Société des Aquafortistes’ (the official organization of the Etching Revival), publishing his plates through the society’s albums.

Manet’s etchings were usually made expressly for publication in books, and the subjects he treated in printmaking are the same as those treated in his oil paintings. In many instances they were taken directly from finished paintings.

This etching reproduces Manet’s sensational painting of ‘Olympia’, exhibited at the Salon of 1865. The artist etched two versions of the subject, one small and one large. The small plate, as presented here, was published in Émile Zola’s booklet of 1867 ‘Édouard Manet, Étude biographique et critique’. The release of this booklet was set to coincide with the opening of Manet’s one-man show in May1867.

There are a number of differences when comparing Manet’s original composition in oil with the present etching. Manet reduced the height of the original composition by eliminating the lower part of the bed, and he also introduced a curl in the middle of Olympia’s forehead.

The print exists in six states, although after the first state was completed very little change was made on the plate. Subsequent alterations were mainly in the reworking and darkening of the background, and the contours of the model’s left hand.

Browse other works by Edouard Manet 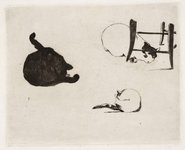