Getting ready for bed 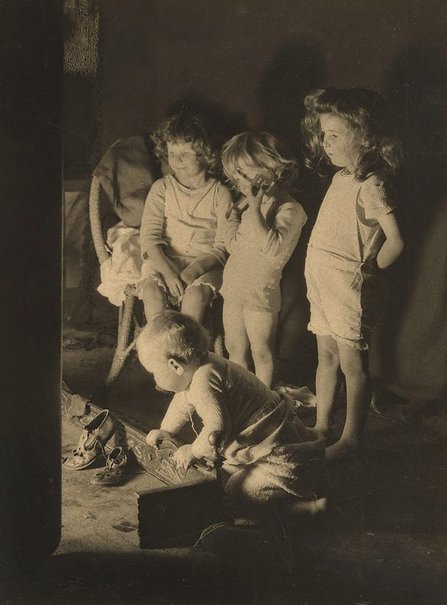 Harold Cazneaux was born in Wellington, New Zealand, 1878 and died in Sydney, 1953. He arrived in Australia in 1889. In 1904 Cazneaux moved to Sydney and began photographic work at Freedman & Co. in George Street. He joined The Photographic Society of New South Wales in 1907 and began showing in their member's exhibitions. The Photographic Society honoured him in 1909 by offering him the first Australian solo photographic exhibition. The prints from this exhibition were sent to the London Salon initiating his success overseas. In 1916, with Cecil Bostock and a group of like-minded pictorialist photographers, Cazneaux established the Sydney Camera Circle. Cazneaux developed the idea of a uniquely Australian form of pictorialism that took account of the bright antipodean light. In 1920 Cazneaux became the official photographer for 'The Home', a periodical that ran from 1920-1942. In 1938 he was made an Honorary Fellow of the Royal Photographic Society of Great Britain.

'Getting ready for bed' depicts four of Cazneaux's daughters, Rainbow, Beryl, Jean and Carmen, pictured from left to right. The work is a photographic study that explores the effects of constructed light. As such, it is a good example of the artist's attempt to explore the technical possibilities of the photographic medium. The work reveals Pictorial attributes, particularly in its representation of soft tones and hues, and its chosen familial subject matter. Cazneaux's daughters were regularly used as models throughout their childhood and youth by their father.

Gift of the Cazneaux family 2001

Harold Cazneaux
Getting ready for bed