Key to open not to lock 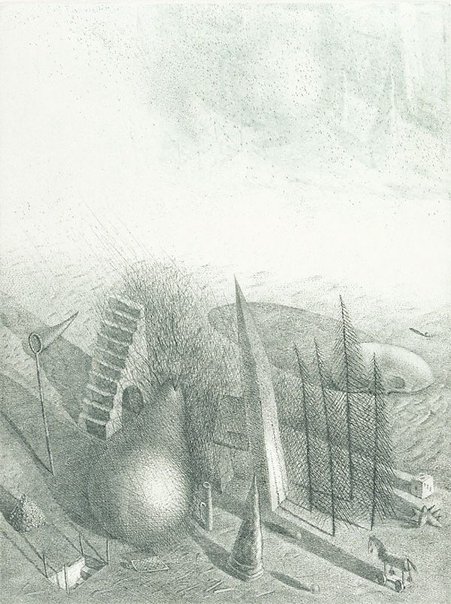 Petr Herel was born at Horice, Czechoslovakia. He studied at the School of Fine Arts, Prague 1957-61 and the Artist Book Studio under Karel Svolinský at the Prague University of Applied Arts 1964-69. In 1970 he was awarded a French Scholarship to study printmaking at the Atelier Nourrison in Paris, afterwards returning to Czechoslovakia. He spent a short time in Rome before moving to Melbourne in 1973. He lectured in drawing and printmaking at Caulfield Institute of Technology in 1975. In 1976 he visited the south of France with his family where he joined Fondation Maeght at St Paul de Vence and printed the plates of other artists. He lectured part time the following year at l'École Nationale des Beaux-Arts de Dijon, where he met typographer Thierry Bouchard who later became a collaborator on a number of projects with Herel. He returned to Australia in 1978 and was appointed to head the Graphic Investigation Workshop at the Canberra School of Art, which specializes in the making of artist's books. He returned to Paris for a year in 1985 to teach at l'Institut des Arts Visuels, Orléans and l'École Supérieure des Arts Décoratifs, Paris. In 1993 he and Jenny Zimmer established the Centre for the Development of Artists' books and limited editions at Monash University, Melbourne; he returned to the Australian National University, Canberra in 1993.

'Key to open not to lock' was a Print Council of Australia Patron Print for 1989, and was printed by the artist at the Canberra School of Art.

Petr Herel
Key to open not to lock

Browse other works by Petr Herel