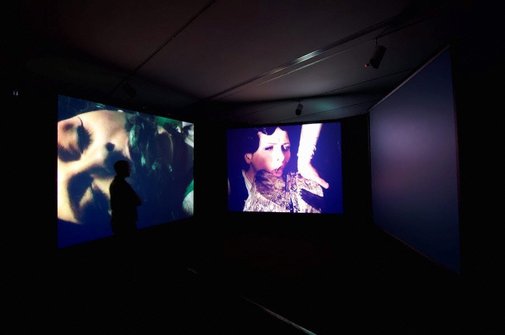 In ‘The shadowers’ a sado-masochistic relationship of force and submission unfolds between three protagonists, or shadowers (one of whom is the artist). The interplay between these forces is presented in an episodic fashion: intrusive acts of physical force take place on the body alongside beguiling moments of intimacy. The participants are connected in emotional and physical ways: their skin is pierced and string is used to unite them, they dance the tango in glittering dresses, and one feeds from the other’s bejewelled and bloody face. These acts are dramatic and seductive and it is in their ritualised choreography that desire is represented with aggressive and scintillating dimension. Horror, surrealism and of course feminist performance art are all points of reference. Monika Tichacek’s body is the prime visual and visceral loci of her performances; however, unlike the live performance art of the 60s, Tichacek generally performs, films and edits her own work. Yet her performances are similarly explicit and graphic, wherein she sutures her skin and pierces her tongue, acts which complicate the stereotypes of femininity and sexuality. Here, in a shadowy psychosomatic space, desire, sex, violence and beauty both coalesce and rupture before our eyes.

Australian Centre for the Moving Image and The Ian Potter Museum of Art, Australian culture now, 2004.