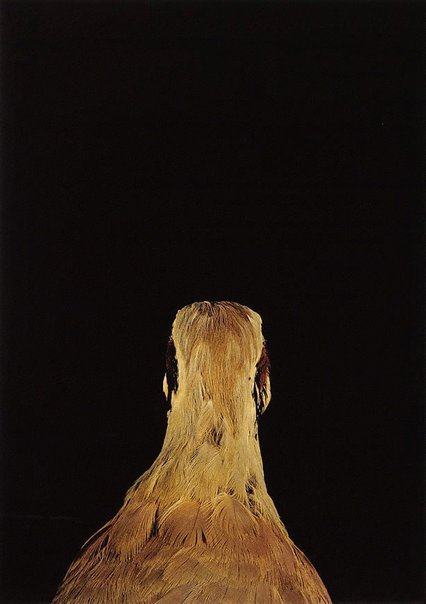 In recent years Lynne Roberts-Goodwin has received a number of awards and grants through various research institutes, museums and scientists in the field that have enabled her to study wildlife in India, America, Australia and Abu Dhabi, United Arab Emirates. She has documented endangered pieces, such as birds of prey, migratory birds and quarantined species. Her aim is to form links between the sciences and the visual arts through a conceptual process of artistic classification, which is equally motivated by the aesthetics of images, illusion and the appearance of surfaces. For instance, for ‘Blindfold’, her exhibition in the AGNSW Contemporary Project Space in 1997, Roberts-Goodwin documented the Wapiti (red deer) and its trade from rural Australia to Seoul, Korea. A visual, almost liminal uncertainty pervaded these images of deer, revealing sight, and therefore understanding, as obscured, blinded.

‘bad bird #5’ is part of a series of 85 images produced while Roberts-Goodwin was on a residency through the Institute of Electronic Art, New York, in 2001. From an exhibition entitled ‘Landings’, it further develops the imaging of our interdependent relationship with animals, and how we translate human feelings to the natural world. Printed on metallic paper to enhance the sheen of the feathers, ‘bad bird #5’ is utterly ambiguous. The shape is birdlike mainly because it is feathered. With its face against the wall we cannot tell what kind of bird it is, or indeed if it is alive. Roberts-Goodwin sees the bad-bird suite as being anti-portraits which highlight our concerns with interpreting and defining.