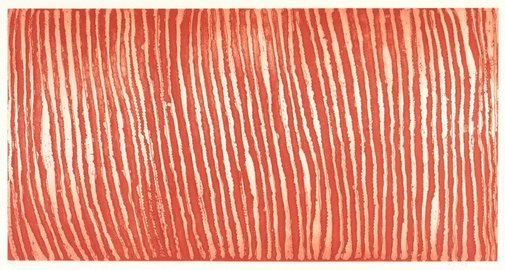 This print from Northern Editions at the Northern Territory University is from a series that introduces some new artists and charts the expansion of established artist's repertoires into printmaking. The prints were all produced during 1999. Printmaking is one of the most exciting areas of contemporary Aboriginal art practice.

Older artists can experience new media and produce limited editions on paper whose imagery they previously painted on canvas or board or perhaps carved in wood. Printmaking affords such artists a continuity of traditional practice while often producing very different contemporary images.

Artists from many indigenous communities have produced prints at the printmaking workshop of Northern Editions at the Northern Territory University.

Alice Nampitjinpa from Ikuntji Women's Centre is an established painter who has recently begun printmaking. In this print she has captured the visual essence of sandhills. By depicting sandhills seen at a distance, or the marks left on the surface of the sandhill by the action of wind and water, the artist gives this print several levels of interpretation.

"'Tali at Talaalpi' ... depicts Talaalpi, a swamp to the east of Walungirru, Kintore. This is Alice's birthplace and her father's country, 'Ngurrapalangu', which is porcupine jukurrpa. The sandhills are very important to Alice, who paints them repetitively, retelling the many stories associated with this area. One of the stories of Talaalpi is when the porcupine was travelling through sandhills and passing near two carpet snakes (kuniya kutjarra) who were living underneath the water. In the etching Alice has identified the sandhills or 'tali' as thin repetitive stripes as in the marks made in the sand left by wind. "Every day the porcupine comes up to the rock hole: he is sitting, drinking, walking and eating tucker" - Alice Nampitjinpa.", excerpt from 'Land Mark: Mirror Mark', Northern Editions, Darwin, 2000.

Rose Cameron, Land Mark: Mirror Mark, 'Ikuntji Arts Centre, Haast's Bluff', pg. 53-54, Darwin, 2000, 53, 54 (colour illus.). This version is an uneditioned printer's proof printed in red ink in 1998. The work was then editioned and the Gallery's version is from this edition.