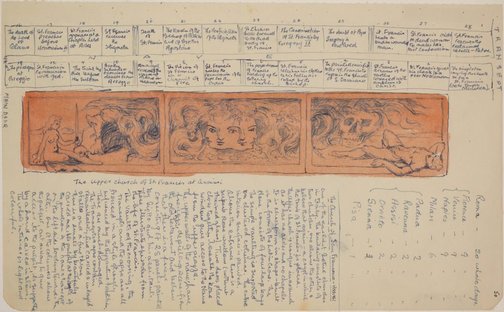 Gleeson first met Robert Klippel in London, when both were living at William Ohly's Abbey Art Centre in New Barnet, Hertfordshire, north of London. They exhibited together in 1948 at ELT Mesen's London Gallery where this painted sculpture, their first collaboration, was included. The titled derives from the sequence 'The burial of the dead' in one of TS Eliot's best-known poems 'The Waste Land' 1922.

Eliot was read by many of Gleeson's contemporaries and has been a sustaining influence for Gleeson as well. He introduced Klippel to Eliot's poetry. As a young man, Gleeson was divided between becoming a writer or painter and the reading and writing of poetry have remained important to him throughout his life.

Five pages from a sketchbook (Study for triptych?)