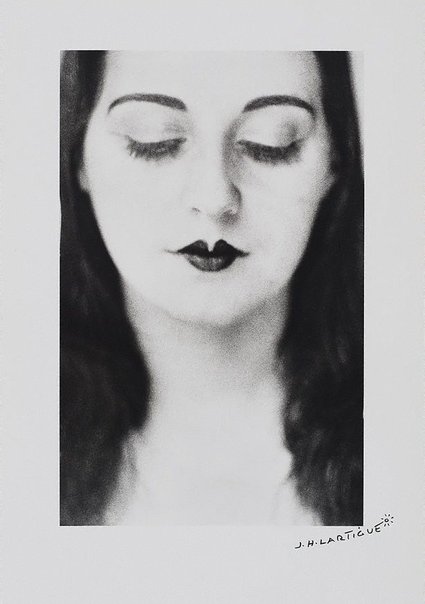 ‘People say: “I do not trust my eyes.” Myself, I always trust them, my eyes. But there are days when they bring me slightly too much astonishment.’ Jacques-Henri Lartigue 1909–10 1

The son of an amateur photographer, Lartigue took his first photographs in 1901 at the age of six. He received a camera the same year and went on to become an inadvertent chronicler of the 20th century. He was an incessant diary keeper in which he kept drawings, notes and photographs of the day’s events. Lartigue photographed the modern age of cars and airplanes, registering the new century’s compulsion for speed, yet considered himself as foremost a painter rather than a photographer. His fascination with the camera, however, never waned and he recorded life’s events with flourish: ‘I open my eyes, then shut them, then open them wide and Whoosh! I catch the picture with everything in it: light, shadow, fullness and emptiness.’ 2

The enigmatic, expressionless face of ‘Neuilly-Solange’ is a finely constructed composition that denotes the body as object, framed and enclosed by the tight cropping of the image. From the precise application of the lipstick, to the highly defined eyebrows to the almost, but not quite, closed eyes guarded by languishing eyelashes, this face is to be looked at. Her reciprocal gaze, however, is completely denied. The head and décolletage take on an inanimate appearance, resembling a mannequin, a motif employed by the surrealists as precipitating desire. Celebrating the female body in parts rather than as a whole is a surrealist device used to evoke the uncanny and exploit sexualised metaphors. The emphasis on the throat and chin see ‘Neuilly-Solange’ eroticised as both phallic sign and vaginal void, the tight cropping designating the phallic as both circumcised and castrated, while the cupid bow lips invert the phallic to designate the parting of the lips.

J.H. Lartigue ©Ministère de la Culture - France/AAJHL Permission to copy or print this image has been denied by the copyright owner