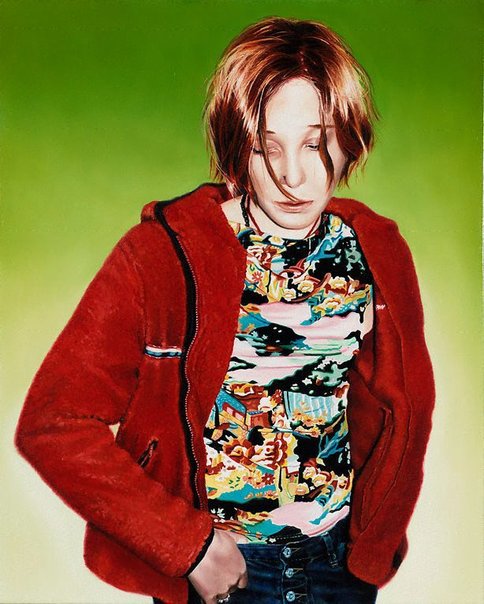 In common with many artists whose careers developed in the late 1980s and 90s, Jan Nelson has worked across several genres including performance, photography and sculpture. Among her most compelling recent works are her series of meticulous paintings of style-savvy teenagers and children which employ a highly refined technical skill and use the visual language of realism. Yet her paintings seem distrustful of painterly representation and often refer to other media such as fashion magazines and advertising.

‘Walking in tall grass, Emily’ is painted from a photograph rather than from life. In transposing the photograph, Nelson has focused on the figure caught in an everyday moment and eliminated the background, echoing the Photoshop aesthetic of magazine images which combine street-cred realism with digital manipulation. Nelson’s painting has removed ‘Emily’ from a particular social or physical environment and set her against a shaded monochromatic colour field. The figure is both isolated and highlighted by this act, a sense of isolation enhanced by the fact that Emily looks down, avoiding our gaze, seemingly caught in a moment of perhaps anxious reverie.

While ‘Walking in tall grass, Emily’ echoes the immediacy of the photographic instant, with Emily caught seemingly unawares in a private moment, Nelson’s process is the slow-time, tactile and exacting medium of oil paint. Photography has become pervasive in how we experience visual identity, but Nelson’s work embeds the momentary into a far more considered process. This reflects the careful construction of image choices that teenagers experience in the ‘groom and consume’ ethos of affluent youth culture. The experience of identity at the intersection of consumer options and individual choice is echoed in the display of clothing and the isolation of the introspective averted faces of the sitters, suggesting an ‘every teenager’ rather than a portrait of a specific person despite the naming of each work.

Over the past decade there has been an international interest in art that explores youth culture, fashion and consumption, and the increased role of the visual in the construction and experience of a sense of ‘self’. The selection and rejection of self-image is closely connected to identification with images circulating in magazines, on TV and on the internet. Nelson’s paintings reflect this, while suggesting the real vulnerability and awkwardness of experiencing identity in a matrix of often conflicting influences and desires. The evident care required to paint like this embeds Photoshop digital slickness back into a skill and labour that is manifestly humanising.