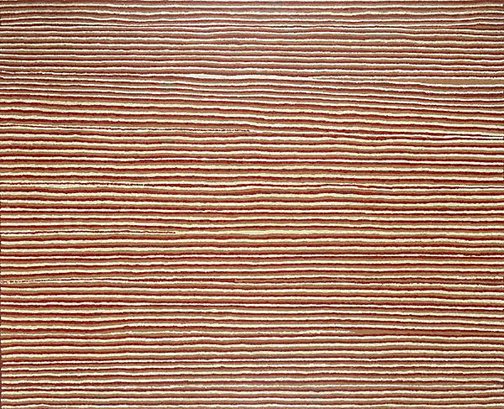 Turkey Tolson Tjupurrula was among the first of a slightly younger generation of artists to begin painting at Papunya in 1973. He had observed the work of older men, including Mick Namarari Tjapaltjarri, George Maxwell Tjangala and Ray Inkamala Tjampitjinpa, before picking up the brush himself. By the late 1970s he had developed into an accomplished artist in his own right and, because of his understanding of non-Aboriginal people and his command of English, was in a good position to be an effective cultural broker for his older relatives.

Tolson was born just outside Ikuntji (Haasts Bluff), soon after his family had migrated east out of the Gibson Desert. As a young man he honed his bush skills, trapping dingoes around the western MacDonnell Ranges with his father. In the 1970s and early 1980s, Tolson spent his time alternately in Papunya and at the outstation, Kungkayurnti. In 1985 he moved west to Walungurru (Kintore), which is just to the north of his ancestral country. He soon established an outstation at Yuwalki, along the route of the Kungka Kutjarra (Two Ancestral Women) that he depicts so often in his paintings.

Tolson's work developed through a succession of styles. His earlier, smaller works were modest, and conformed to the accepted conventions of the Pintupi artists. By the late 1970s, however, he had completed several large canvases in which the application of concentric circles and dotted bands was expressed to create an effect of mesmerising perfection. The 1980s was a period of visual exploration for the artist, his technical expertise allowing him to create subtle tonal effects combined with bold iconographic elements.

In 1990, Tolson painted 'Straightening the spears at Ilyingaungau' – this work, now in the Art Gallery of South Australia, Adelaide, heralded in a new phase of minimalism in Papunya Tula art. Throughout the next decade he would occasionally represent the same site, using arbitrary variations of his dotted line to echo the irregularities of thin mulyati (acacia species) spears. 'Straightening the spears', 1999, is a fine example of these later works. Living at Yuwalki, Tolson regularly visited the small claypan, llyingaungau, or the cave site, Mitukatjirri, from where the ancestral warriors had travelled.

As chairperson of Papunya Tula Artists from 1985 to 1995, Tolson was a key contact between the public and the artists and their country, and his quiet confidence will be remembered by all who met him.