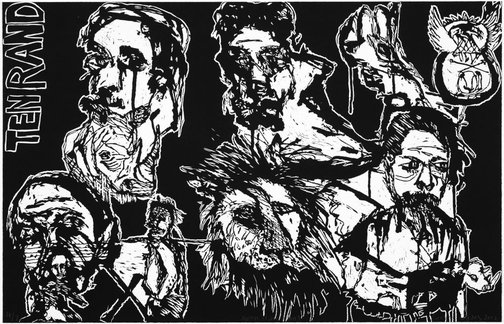 'Moon hair runt' 2012 was made during a print residency in Johannesburg, South Africa. Long drawn to the work of William Kentridge, Jones was interested in working in the studio of one of Kentridge’s printers, David Krut. He undertook a residency at Krut’s print workshop in Johannesburg, which he described as an ‘oasis’ in an otherwise edgy and dangerous downtown. He also visited areas out of town, including Marikana, a site where striking miners were massacred in 2012, and a game lodge, Madikwe Game Reserve on the South Africa/Botswana border.

“The rhinoceros, lion, elephant, buffalo and leopard are known as the Big Five in South Africa. The animals are all depicted on South African Rand bank notes. While I was at Madikwe I decided to make a series of linocuts depicting the top politicians with the big five animals. This was carried out in collaboration with South African artist Senzo Shabangu, whom I met at David Krut Projects. …..These linocuts were cut from very stiff flooring linoleum that was bought in rolls. Fortunately Senzo is a master cutter and transformed the drawings into vibrant prints." (Locust Jones and Vicky Browe ‘Locust Jones: a printmaking residency in Johannesburg’,'Imprint', volume 48 number 1, p.9)

The work depicts politicians and miners, endangered animals, single-cell organisms and instruments of technological warfare, the images drawn from print and electronic media. Barbed wire in the lower part of the image refers to his visit to the Marikana mine, site of a very recent massacre, and he also used symbolism taken from the South African Rand. The lino was cut by Senzo Shabangu from drawings on the lino made in ink and a bamboo stick by Jones (in much the same manner as his drawings on paper), and the edition was printed by Jillian Ross.

Browse other works by Locust Jones