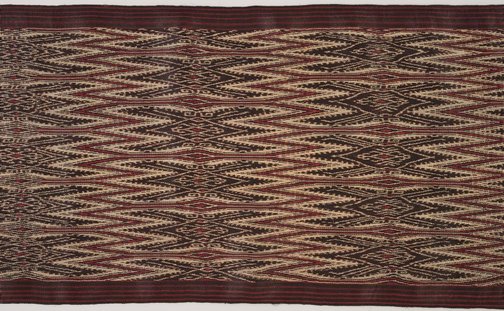 This type of textile is called 't'nalak'. It is made from the fibres of the 'abaca' plant ('Musa textilis'), which is a species of banana plant native to the Philippines. Traditionally the stalks of the plants are cut and the layers are separated by rubbing them between that hands or feet until the individual fibres are exposed. The rough fibres are immersed in water for cleaning and softening and are later beaten and left to dry. Once completely dry, they are woven together to make yarn.

T’boli weavers are sometimes referred to as ‘dream weavers’ because they are said to reproduce patterns bestowed on them in their dreams by their supreme deity, Fa Dalu. While the patterns of the 't’nalak' textiles are varied with over 100 patterns they are based on the repetition standardised motifs. The zig-zag ('sigul') forms an integral part of T’boli textile design and is used in combination with other geometric shapes to create pictorial motifs like the crab '(kleng'), the python skin ('sawo'), the shield ('klung') and the frog ('tofi'). This example appears to feature the python skin ('sawo') pattern. In conjunction with their geometric patterning, t’nalak textiles exhibit a cosmological colour scheme. The white or undyed motifs usually take the form of humans or animals and are the most cosmologically significant part of the design. The use of red is secondary and is seen to provide a complementary colour to the white motifs. Black is regarded as the least important and serves only as a backdrop to the white and red patterns.

The patterning on this blanket is produced via the warp ikat, which means that the warp threads (the yarns tied to the loom) were tie-dyed before weaving the cloth. This gives the pattern the pixelated appearance associated with the ikat technique.

Browse other works by T'boli