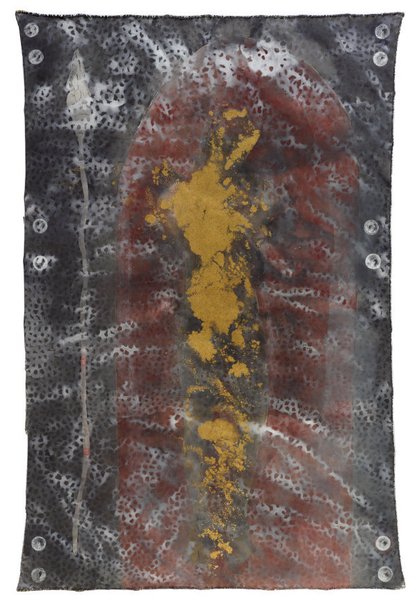 "The gold powder came from the workshop crew in the Art Gallery of NSW. They gave me some of this powder to try, which I did. The white patterning was done by dipping a large house painting brush in some mixed up white pigment, acrylic binder medium and water and looping it over the canvas allowing the watery paint to settle on the surface of the canvas, like icing a cake.... The spear is one I drew from the collection of the Qld museum. It came from Riversleigh Station, where my Grandmother was born in 1912. When Julie Nimmo was making the film 'Songlines to the Seine' we went into the Qld museum and looked at some objects in the collection. I saw this same spear again, it was like meeting up with an old friend, I was interested to see if it had changed from how I had remembered it. The circles are like the circle constellation points I use now to hold the gaze and travel it across the canvas, but in this case they are more button / shell like. I used to use the arch / icon form a lot in previous works, with female forms appearing within them. sometimes I would just use the arch, sentinel like, on its own.

There were burial chambers that I saw in our area, this references them in a way, like a spirit form within the rock chamber.
I just had another look at this work. I used the button like forms to pin the work down in a way, like holding it in place, pinning it out. I remember thinking they were a bit like ears, listening devices, speakers...."

Browse other works by Judy Watson