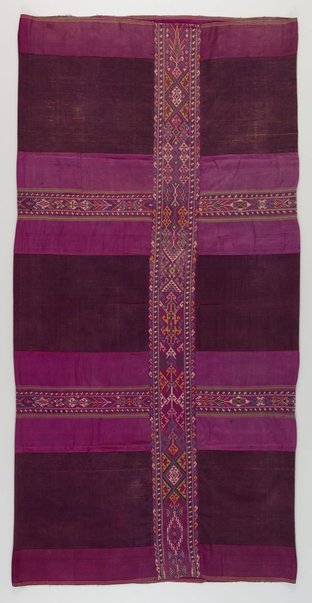 The Maranao are one of the Muslim groups of Mindanao. Both men and women wear tubular garments called malong. This type of garment is used in a number of different ways, from skirt to gown to baby carrier, and even sleeping blanket.

The two main types of Maranao tubular garments are the 'malong landap', worn by men and women, and the more complex and decorative malong a andon worn exclusively by women. While the 'malong' a andon is typified by beautiful supplementary weft and ikat designs, the 'malong landap' is characterised by large expanses of 'landap' or ‘pure’ colour interrupted by tapestry bands known as 'langkit'. The 'langkit' that run vertically and horizontally across the 'malong landap' add decoration and serve to join three individually woven pieces of fabric into a skirt. The band that runs vertically down the centre of the 'malong landap' is called the 'lakban'. The two narrower horizontal bands are called 'tobrian'. The geometric designs of the 'langkit' are similar to the curvilinear designs of Maranao woodcarving and, like the woodcarvings, are known as 'okir'.

The colour scheme for 'malong landap' usually combines large fields of purple, magenta or green silk bordered and joined by purple, yellow or green 'langkit'. 'Malong' that exhibit large fields of bright yellow silk enhanced by dark purple or green 'langkit' are even more unusual and highly prized. While cotton and abaca are materials produced locally, silk was always imported, usually from China. China was perhaps also the cultural origin for the significance given to yellow as a symbol of high status.

Browse other works by Maranao