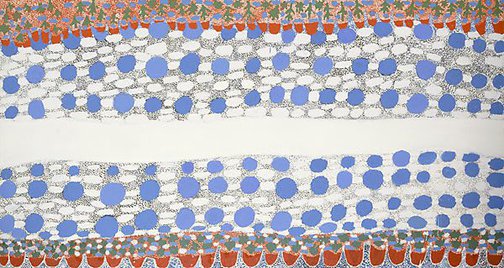 Narputta Nangala's 'Karrkuntinytja', 1999, is essentially a landscape painting of the countryside surrounding her birthplace (Karrkuntinytja). Narputta is a senior artist and custodian for her community at Ikuntji (Haasts Bluff) and one of the most prominent of the Ikuntji Women's Centre painters. Narputta is the wife of Timmy Tjungurrayi Jugadai who painted for Papunya Tula in the 1970s and 80s. Narputta began painting in her own right in 1992.

'Karrkuntinytja' is an amazing painting that shows Narputt's unique vision of her country. There seems to be a vastness, a rich hinterland, well treed and watered. The white horizontal void dividing the painting jolts the eye back to the line of hills bordering the top and bottom of the painting. Lakes or waterholes and what could be salt pans are the dominant elements covering the field.

© The estate of the artist. Licensed by Ikuntji Artists, Haasts Bluff