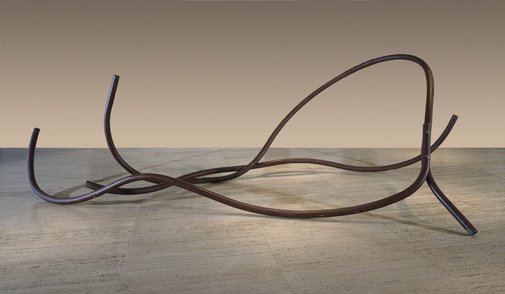 William Tucker was born in Cairo, Egypt in 1935 to English parents, his family returning to the UK in 1937. In the late 1950s, after reading modern history at Oxford University, he studied at the Central School of Art and Design and later at Saint Martin's School of Art in London where he was taught by Sir Anthony Caro.

Tucker was a leading member of the New Generation sculptors, a group of young British artists working in the 1960s who embraced materials and techniques associated with industrial fabrication, often using them to make minimal, geometric forms. In 1966 he was included in the now-legendary 'Primary structures: younger American and British sculptors' exhibition, curated by Kynaston McShine for the Jewish Museum, New York, which is widely credited with introducing minimalism to the United States.

In the early 1970s, Tucker began using metal and timber to create more linear and expressive forms. For the 'Beulah' series he created organic shapes that appear more concerned with line than volume – their twists and turns belying the fact that they are made from tubular steel.

In 1972 works from the Beulah series were included in the artist’s exhibition in the British Pavilion at the Venice Biennale.

Browse other works by William Tucker