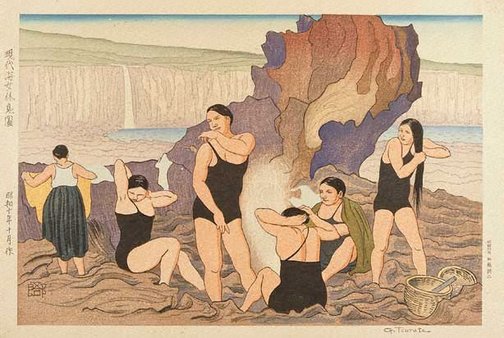 Tsuruta Gorô established himself at the government exhibitions (Teiten). He worked for the arts section of a newspaper in Korea from 1912, returning to Japan in 1919 via China and Siberia. This print was made after the artist's trip to Scandinavia, Germany & France in the early 1930s. Evident in this work is a kind of exoticism. The artist had seen Western paintings of bathers & he chose women divers who were confident in their bathing suits, rather than coy women at bath. The image is reminiscent of 'Beach Pattern' by Charles Meere.