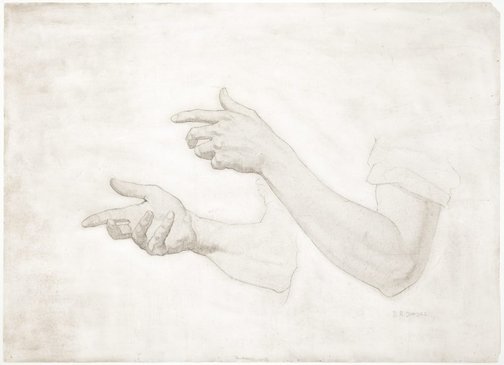 Douglas Dundas was an accomplished painter in a circle of artists that included Lloyd Rees and Roland Wakelin and is greatly respected for his role as a teacher at Sydney’s National Art School from 1930–65, where he encouraged a generous diversity of approach from his artist-teachers. He was an active member of Sydney’s art establishment as member and later president of the Society of Artists and a long-serving Trustee of the Art Gallery of New South Wales from 1948–70.

Dundas was born in 1900 at Inverell in northern New South Wales. He moved to Sydney in 1922, studying at Julian Ashton’s Sydney Art School under Henry Gibbons who had been assistant to George Lambert. Following travel and study in Europe, he returned to Sydney and was appointed to the teaching staff of East Sydney Technical Collage in 1930 (which later became the National Art School), becoming Master of life drawing the following year, Head of Painting in 1933 and Head of the School in 1958 – a position he held until his retirement in 1965. He exhibited at regular intervals throughout his career, with a retrospective survey organised by the Art Gallery of New South Wales in 1982.

This remarkable drawing with its companion '(Seated female)' also in the Gallery's collection, formed part of the submission for which Dundas was awarded the Society of Artists Travelling Scholarship for 1927, enabling him to travel and study in Europe to further his career in art. Other recipients of the scholarship have included eminent artists such as George Lambert, Roy de Maistre, Arthur Murch and William Dobell.

Made during his studies at the Julian Ashton school, the drawing was one of the trio of drawings required for each student’s submission to the award – this comprised a nude, a draped figure and a pair of hands. Dundas’ precision of line and rendering of tone reflect the strong influence of Lambert through Henry Gibbons’ teaching. Scholarship entrants were required to submit three paintings (a nude, a portrait and a composition) as well as the trio of drawings.

Browse other works by Douglas Dundas