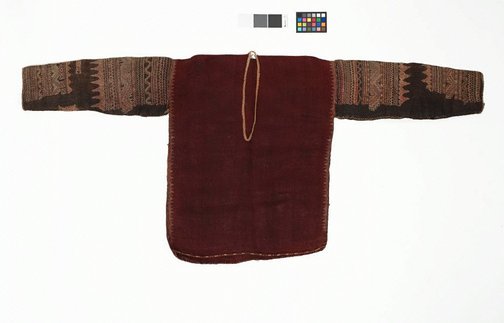 This blouse is typically worn by Mandaya women with an enclosed skirt. The sleeves are decorated with triangular patterns that are a variation of the tumpul designs found in Indian patola and Indonesian textiles. Characteristically, the embroidery is concentrated on the sleeves and an elongated opening for the head is cut into an undecorated bodice.

This blouse is made from the fibres of the 'abaca' plant ('Musa textilis'), a species of banana plant native to the Philippines that has been used in textile production since at least 1686. Traditionally the stalks of the plants are cut and the layers are separated by rubbing them between that hands or feet until the individual fibres are exposed. The rough fibres are immersed in water for cleaning and softening and are later beaten and left to dry. Once completely dry, they are woven together to make yarn. Unlike the locally produced abaca used for the bodice, the silk used in the embroidery was probably imported from China via Muslim traders.

Shirt with silk embroidery on sleeve