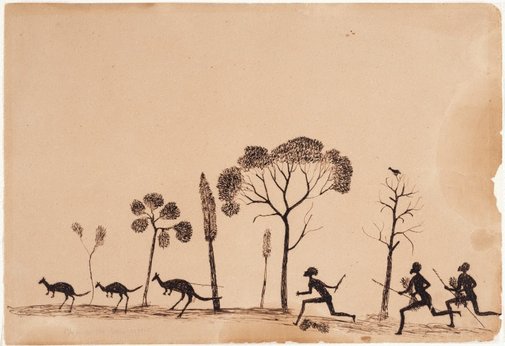 Tommy McRae lived with his family in the upper Murray region of New South Wales/Victoria, on a reserve at Lake Moodemere near Mahgunhah and Corowa. He began drawing late in his life, and his drawings, made using readily available commercial ink, pens and sketchbooks, depict aspects of traditional Aboriginal life, the impact of British colonialism and the incursion of Europeans and Chinese onto traditional Aboriginal land. At the time, his drawings became popular for their novelty among non-Aboriginal audiences for their depictions of an exotic culture and parallels with contemporary European sporting and ethnographic pictures.

This drawing is from a group acquired from the artist from Walter George McMahon, a custom's officer from Albury. It remained with his family until auctioned in 2004. The trees are recognizably from the artist's region. It has marked similarities to another drawing by Tommy McRae, 'Hunting goanna', from a sketchbook in the National Museum of Australia, Canberra. The hunting technique depicted in the drawing was described by a settler in the region, William Locke as:

'The kangaroo and emu were speared – the hunter stealing on his game against the wind, under cover of a bush held in his left hand, the Womerah and spear being grasped in the right. When the black had crept up to within spearing distance, the bush was suddely thrown aside, and before the astonished animal or bird could escape, it was transfixed by a spear.'
(William Locke, "Notes on the language and customs of the tribe inhabiting the country known as Kotoopna" from Andrew Sayers 'Aboriginal artists of the nineteenth century', Oxford University Press, Melbourne, 1994, pg. 36)

Hendrik Kolenberg, Look, 'Australian images from the past: whether rarely seen or familiar, these works move and delight us', pg. 24-27, Sydney, Apr 2005, 27 (colour illus.).