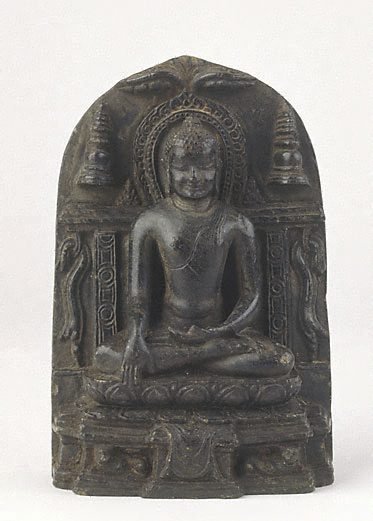 Carved from the smooth, black stone typical in Pala sculpture, this image depicts the Buddha seated with his legs folded in 'vajrasana' and his right hand in the earth-touching gesture ('bhumisparsha mudra') referred to as 'Buddha subduing Mara'. This 'mudra' is explained as follows: while the Historical Buddha Shakyamuni was mediating beneath a bodhi tree in his search for enlightenment, he was approached by Mara, the god of desire and death, intent on preventing him from reaching his goal. Mara coaxed, then threatened the Buddha to abandon his efforts. Finally the Buddha-to-be extended his right hand to touch the earth and summon the earth goddess to witness his entitlement to attain Enlightenment. Images of the Buddha seated with his right hand in this 'mudra' appear in stone and bronze throughout Southeast Asia. A most unusual feature of this figure is the incised decoration on the back. Such a design is most commonly seen on the front of a Tibetan metal 'ga'u' (portable reliquary) used to hold relics, prayers and other sacred objects.