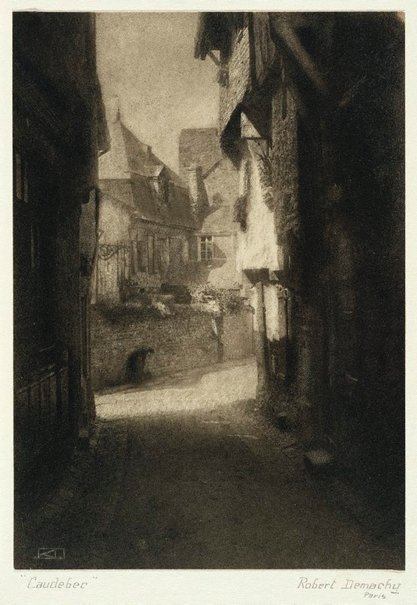 Considered the leading French pictorial photographer of his day, Robert Demachy’s work represents the height of the artistic manipulation used to achieve an impressionist aesthetic in photography. Demachy was one of the founding and most active members of the Photo-Club of Paris from 1894, which was the principal French organisation of Secessionist photography. In 1903 he was invited to join England’s equivalent group, The Linked Ring Brotherhood. Perhaps more than any of his international counterparts, Demachy looked to impressionist paintings as a blueprint for his own photographic practice. To enhance the effects of such paintings in his own work, Demachy pioneered the use of developing processes such as gum bichromate and later bromoil, which allowed for alterations to the image using brushes and sponges during the course of printing, giving the photograph the quality of a charcoal drawing. While Demachy saw this individual control of the image as an ideal for art photography, other photographers such as Peter Henry Emerson felt that it detracted too much from the qualities of the medium itself.

Demachy’s treatment of such techniques is evident in ‘Caudebec’. The drawing-like quality of the print surface, with the visible imprint of the artist’s hand, indicates Demachy’s restructuring of the image. This was crucial, he believed, to creative expression in photography. ‘Caudebec’ is indicative of the way Demachy pared back superfluous detail and enhanced the composition through accentuating dense blacks and brightly highlighted tones, a method which became central to the innovations of his impressionist technique.

Browse other works by Robert Demachy