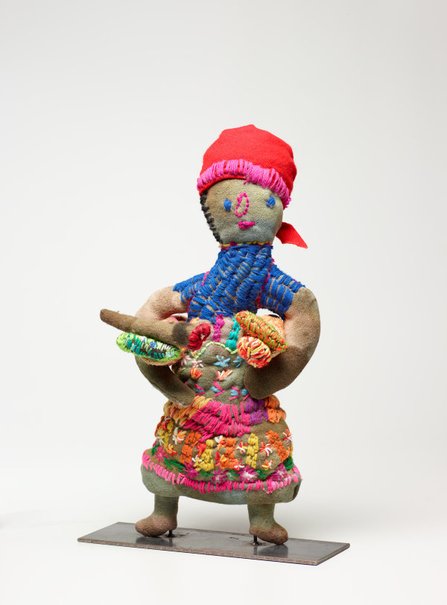 Trudy Inkamala is the sister of fellow artist Dulcie Sharpe who encouraged her to join Yarrenyty Arltere after the passing of her husband in 2013. Inkamala has been an advocate for the importance of culture, helping to establish Yipirinya School in the 1970’s. Yipirinya’s remit was to provide Aboriginal children with an education that included language and culture in the curriculum. In Woman with Dilly Bags 2019 Inkamala highlights the significance of women collecting resources from Country, while referencing specific attire, such as the head scarf, that connects this figure very directly to the Central Desert.

Inkamala has exhibited broadly in group shows throughout Australia, and her recent works have been included in the following exhibitions: Desert Mob, Araluen Art Centre,; Edwina Corlette Gallery; ‘We are always making something from what we have’, Salon Arts Projects,; and at Short Street Gallery. Inkamala’s works are also held in public collections, including the Queensland University of Technology Art Museum; Art Gallery of South Australia; Araluen Arts Centre; and National Gallery of Victoria.

Purchased with funds provided by the Aboriginal Collection Benefactors' Group 2019