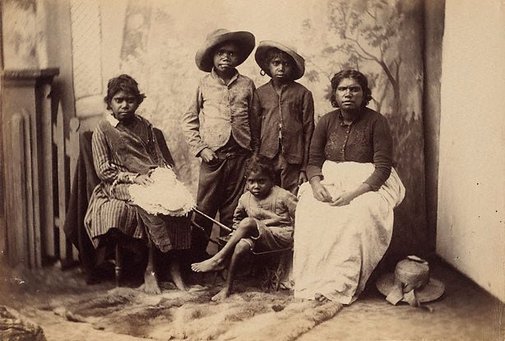 ‘Aboriginals’ is a strange photograph as the backdrop has been set up in an indeterminate space which could perhaps be outside (is the gate to the left a studio prop or is it part of a house?). The floor appears to be indoors, covered by a kangaroo skin on which the three figures in the foreground rest their feet. Possibly this image was supposed to be cropped left and right, yet, if so, why was it printed full frame? The woman and four children are carefully although informally posed and all are attentive to the camera and photographer. There is no information regarding the subjects or their location; if this was a commissioned portrait, it would have cost the subjects money. Conceivably the family group was seen on the photographer’s travels and were posed, or they lived in Sydney and were brought to the studio as examples of Indigenous city folk. The image appeared on a postcard which was mailed in 1903.

There is no information as to the identity of the photographer, however the image was originally catalogued as Kerry & Co.1 Although this studio took many photographs of Indigenous people for the Views trade, none have a relationship to this image. There are some general similarities to Henry King’s photographs of Indigenous people in that these too are town or city folk posed against a backdrop, but the relationships are too vague to attribute this photograph to King.2