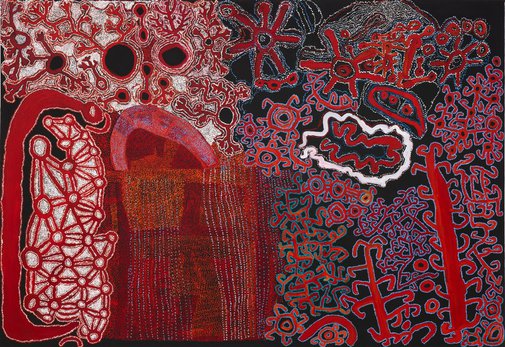 The art centre documentation for this work states;

“When the senior Spinifex men talk of 'Wati Kutjara' they whisper in hushed tones but with a deep reverence and authority, for they are speaking of the sacred, of 'Creation' and the first beings. Wati Kutjara or Two Men are the personification of the fauna they inhabit. The animals the men manifest into being are Mula Maru (Black Nosed Monitor) and Tingka (Sand Goanna). These beings walk the earth as both man and animal, creating meaning in the landscape as they move through it and leaving an essential moral narrative depicted into a mapped physical environment that is both religion and song. Five senior artists have portrayed Spinifex Country within the broad brush of each person’s authority and connection to their significant sites. As the collaboration begins with Wati Kutjara Tjukurpa (Two Men Creation Line) and Fred Grant placing the well-worn path the Two Men travel on their approach to the site of Kupanya. It is here the men kill and butcher two emu only to see their catch stolen as its being cooked whilst they are preoccupied. Adjacent to Kupanya, Patju Presley lays down the significant site of Tjatunya where the Two Men etched a monolithic kali (boomerang) into the immediate landscape that has the life affirming water flowing from under it. Nearby Ned Grant plays with the metaphysical, interweaving the flora and fauna, making the Ngalta (Desert Kurrajong) the life force, the representation of the animal, the man and the tree all in one. He places the men within reach of their kali at Nyuwinyi. This is where the Two Men diverge into Walawuru Tjukurpa (Eagle Creation Line) and where Lawrence Pennington creates the space for the eagle to soar above the terrain as it searches in vain for its lost children. All this as Simon Hogan sit patiently in the landscape nearby, his significant site of Lingka is where the Walawuru loses his brother in the great rains that engulfed the area. These events were the beginning, the foundation of the religion that was being born into the surrounding terrain. The layers continue to unfold, the men want to paint the country into life, depicting the narrative as the singing continues and delving deeper into a lived landscape that is symbiotic with the self.”

Browse other works by Ned Grant

Browse other works by Fred Grant

Browse other works by Patju Presley

Browse other works by Lawrence Pennington

Browse other works by Simon Hogan