Stoops in the snow 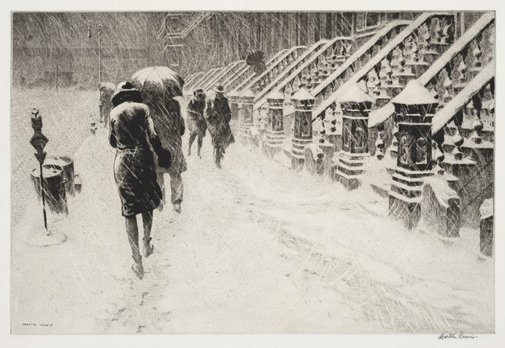 Martin Lewis was born in Castlemaine in 1880. As a young man he moved briefly to Sydney, where he spent time at the artists’ camps on Sydney Harbour. While in Sydney he studied briefly with Julian Ashton and had at least two cartoons published in ‘The Bulletin’, in 1899. The Gallery has three pencil drawings by Lewis of Sydney subjects: ‘A squatters home, Berry’s Bay'; ‘Berry’s Bay, Sydney’ and ‘Milsons Point and Circular Quay’, all dated c.1900, the latter presaging his later interest in cityscapes of the modern metropolis.

Lewis left Australia for the USA in 1900 and by 1909 was settled in New York. He pursued a career in commercial art until 1928, when he held his first solo exhibition at Kennedy Galleries, New York, which allowed him to concentrate on his work full time.

His best known and most admired prints were made between 1925 and 1935, during which period he sold out editions, won prizes and had a book published on his work in the ‘Masters of etching’ series (which included among its 26 featured artists Rembrandt, Whistler and Goya). After a brief move to Connecticut in the early 1930s, he returned to New York in 1936, but found the market for his work had shrunk. Throughout the 1940s he taught at the Art Students League of New York. He died in 1962.

The full edition of 'Stoops in the snow' was sold out by 1949, with 111 impressions recorded as sold. Flurries of snow are visible in the composition through the delicate use of burnishing and sand-ground, counterpointing the heavy dumps of white snow on the pavement, stairs and bodies of the hunched figures walking by. An early, rejected title was 'Stoops in the snow – west forties', setting the scene in Midtown Manhattan. The strong contrasts of black and white demonstrate the artist’s command of tonal range, depicting strong light in a heavily urban setting, in this case through the weather.

Stoops in the snow – west forties

Martin Lewis
Stoops in the snow

Diane K. Myers, The prints of Martin Lewis: from the collection of Dr Dorrance Kelly, Greenwich, 2011, 19 (illus.). Ill. 16 (another impression)