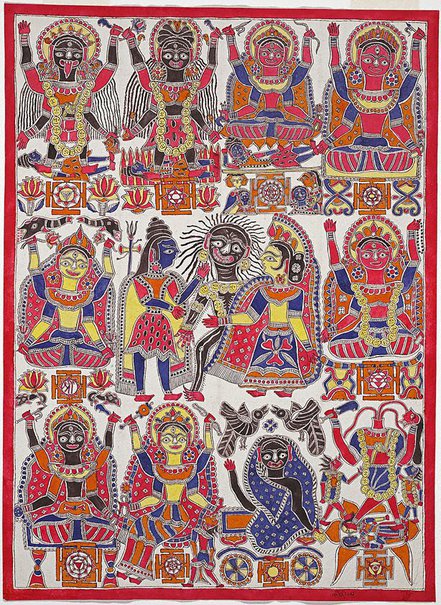 This lively example shows the ten Mahavidyas around Shiva, Parvati, and a dark, skeletal figure who may be the fierce Chamunda. From left to right in the top row are: Kali, Ugra Tara, Shodashi, and Bhuvaneshvari. Kali exhibits her typical characteristics (see essay p. 131). Similar in appearance to Kali is Ugra Tara. She is dark-skinned, fierce and stands amid a funeral pyre on a supine Shiva. She holds her characteristic blue-lotus attribute in her top right hand.

By contrast, Shodashi and Bhuvaneshvari are benign, of red complexion, and sit in meditation postures. Shodashi, meaning ‘Sixteen’, is a goddess in the prime of her youth. She often straddles Shiva above a pedestal supported by the gods Brahma, Vishnu, Rudra and Indra, who appear beneath the goddess’s seat in this painting. Like Shodashi, Bhuvaneshvari, the goddess who grants boons and nourishes the world, is four-armed. She makes the gesture of reassurance with her top right hand, bestows wishes with her lower right, and holds an elephant goad and noose in her two left hands. This iconography differs somewhat from the painting of the goddess in the ‘Tantric Devi’ Series (see cat. 72).

The two Mahavidyas in the middle row are Kamala on the proper right of the central group and Bhairavi on the proper left. Kamala is of golden complexion, pleasant disposition, and holds lotus flowers in her four hands. Two lustrating elephants at the top further betray this Mahavidya’s identity. Even though texts describe Bhairavi as the fierce goddess of destruction, who stands atop a corpse wearing clothes made from the flayed skin of her enemies, here she adopts a benevolent form. The prayer beads and book she holds in her two left hands are Bhairavi’s identifying features.

Matangi leads the group in the bottom row, followed by Bagalamukhi, Dhumavati, and finally the headless Chinnamasta. The dark beauty Matangi holds an elephant goad, a cleaver, a noose, and possibly a shield. According to the goddess’s origin myth, the goddess Parvati appeared before her husband, Shiva, disguised as the daughter of a Chandala, the lowest order within the traditional Hindu caste hierarchy. Taken by her beauty, Shiva also transformed into a lowly Chandala and as he passionately made love realised that the woman was indeed his wife. Parvati then requested that her form as a Chandala woman (Chandali) be memorialised as the goddess Matangi. Because Chandalas have largely remained on the fringes of society, Matangi is typically associated with ideas of pollution and impurity. She reminds Tantric practitioners to challenge conventional paradigms and closely held dualistic ideas.

Equally interesting is the story of Bagalamukhi, the Mahavidya who overcomes a demon who was abusing his boon, which made everything he spoke come true. Bagalamukhi puts an end to his rampage by wrenching out his tongue and bludgeoning him with her club. In the painting, Bagalamukhi towers over a scrawny demon as she brandishes her club and grabs her captive’s tongue. Bhagalamukhi evokes the ultimate futility of words and definitions.

The fierce, toothless Dhumavati, riding in her characteristic chariot, appears next. She is freqently described as a widow, dressed in white, a colour of mourning in South Asia. In the painting, the goddess wears a simple blue sari. However, the conspicuous lack of jewellery and ornamentation underscores her widowed status. Two crows, harbingers of ill luck, hover over the goddess. Despite such foreboding signs, Dhumavati makes the gesture of reassurance with her right hand, and holds the winnowing basket, one of her characteristic attributes, in the other.

The last goddess of the group is the dramatic Chinnamasta, who embodies both the destructive and creative aspects of ‘shakti’. Her left hand holds her head, which she has lopped off with the cleaver she brandishes in her right. Streams of blood gush forth from the severed neck and are devoured by her own decapitated head and her two attendants, Varnani and Dakini. This is explained as the goddess replenishing herself and bestowing others with vital essence and life-force. Chinnamasta tramples on the copulating couple, Rati and Kama, the personifications of desire and lust. This aspect of the goddess’s iconography has been interpreted variously. To some, it illustrates Chinnamasta’s successful detachment from physical and worldly ties. Others maintain that the copulating couple charge the goddess with sexual energy generated from their union. Through her iconography, Chinnamasta conveys that life, death, sex, creation and destruction are all integral aspects of reality.

A distinctive ‘yantra’ (sacred diagram) of each goddess appears beneath the ten Mahavidya figures in the painting. By definition, ‘yantras’ are sacred dwellings or receptacles that hold the essence of a divine being. During rituals, a practitioner will invoke a Mahavidya goddess and make offerings to her via her ‘yantra’ (Kinsley 1997: 3).