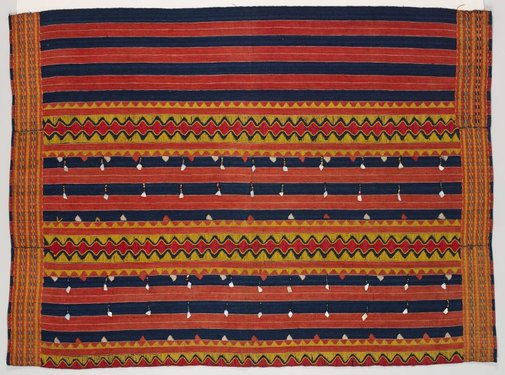 The basic dress for women across the Cordillera region consists of a skirt which is sometimes complemented with a jacket. While many motifs and colours are shared across the region, Kalinga clothing is particularly brightly coloured and is often dominated by bands of fiery red. This type of wraparound skirt is generally known as tapis in the Tagalog language and as kain to the Kalinga. It is characterised by horizontal stripes bordered by decorated panels along the joins and edges. In typical fashion, this example is further embellished with embroidery, beads and mother-of-pearl shells. The shells, which were an imported novelty for mountainous communities like the Kalinga, are attached so has to move and reflect light. This adds a dynamic element to the overall design of the skirt.