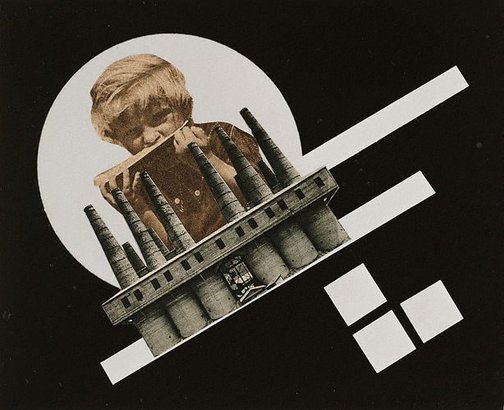 This artist has only recently come to light as a result of research by the Hungarian art historian Attila Pöcze. This work is attributed to Marsovszky because of its similarity to a mural she is known to have done in 1936 at Budapest airport and to works shown at Gallery 292 in New York in 1995. She is recorded as having a photographic studio in Budapest prior to 1945 and there are some Hungarian dance prints signed with her studio name, Fotó Ada-Marsovszky Elemérné. Her techniques with photo-collage follow the example of artists like El Lissitzky in the Soviet Union and dada artists in Germany. The diagonal blocks and the circle that frames the child have strong constructivist associations, while the slab of architecture that runs through the chimneys formally repeats this surrounding geometry.

The abstract design is not painted or collaged but is created using the photographic process known as photogram, a technique much favoured by Man Ray and László Moholy-Nagy. This is the most pared-down form of photograph where an object is placed on photographic paper and exposed so that its shape is left behind like a stark shadow. The images of the factory in the foreground and the sepia-toned photograph of the child were then collaged over the top. This work has the look of a political poster with strong associations being made between mass production and consumption and personal survival. The use of sepia tinting on the image of the child gives it visual emphasis in the composition, subtly suggesting animation against the inanimate backdrop and the industrial foreground.