The Macassan prahu, from Duyfken: The Aboriginal Print Portfolio 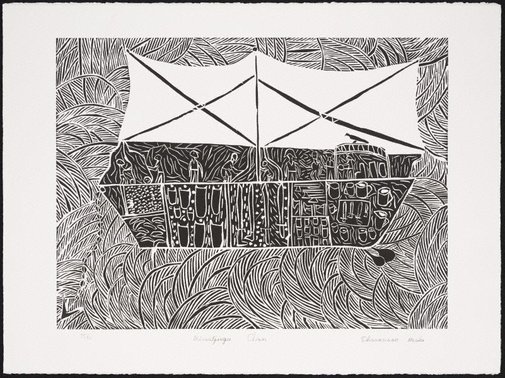 "For some 300 years, until the beginning of the twentieth century, Macassan fishermen from what is now Sulawesi in Indonesia used to sail to the northern shores of Australia every monsoon season to collect sea cucumbers (trepang). They introduced metal to the Yolngu (Aboriginal people of eastern Arnhem Land) as well as words which are still in use today: the Yolngu word for 'outsider' is balanda, a variation on the word 'Hollander'. The prahu, with its distinctive sails and two rudders, is shown with its crew, the cargo of sacks of rice, trepang, and swords and axes. The background design is the Rirratjingu clan design for water".

Browse other works by Dhuwarrwarr Marika