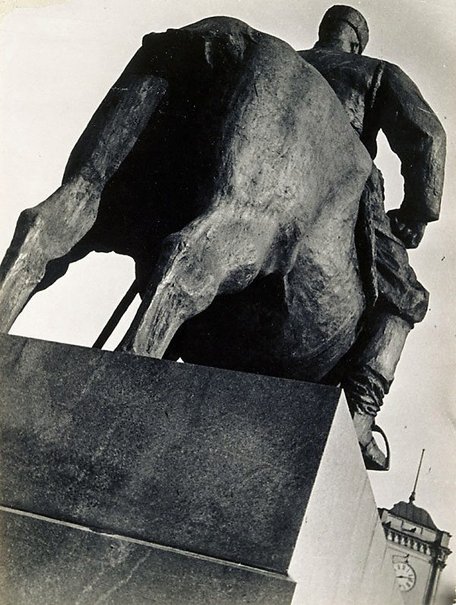 From 1918 Boris Ignatovich worked as journalist and editor (from 1921 editor of the newspaper Gorniak (Miner) in Leningrad and Moscow. He edited humour magazines such as 'Drezina and Smekhach' from 1922-25. He also managed a photographic collective, made documentary films in the 1930s and worked for a number of journals and magazines as reporter and photographer including 'Bednota' (The Poor), 'Ogonyok', and 'Krasnai Niva'.

He started his photographic career in 1923 documenting the changes in the Ukraine after the Revolution. He was strongly influenced in his photographic practice by Rodchenko, with whom he lead the 'Oktiabr' art group, and was the leading photographer (with Rodchenko) of 'Daijosch'.

Ignatovich's first photographic success was a documentary series about villagers, coinciding with the first 5 year plan after Stalin's victory. He tried to alter the traditional format of documentary photography by using very low or very high unconventional angles, developing new perspectives, including birds-eye constructions which rendered the landscape as an abstract composition. Famous photo stories included the first American tractors in the USSR and aerial photographs of Leningrad and Moscow.

After the War, Ignatovich concentrated on landscape and portraiture, experimenting with the use of symbols, picture captions, and ideas about collectivism, particularly at the 'Soyuzfoto' agency where he continued to work as a photojournalist.

'Das Monument Alexander III Leningrad' 1929 - 1931 is an excellent example of the committed revolutionary art of the time. Ignatovich, like Rodchenko, strived to "show things from ways in which they are not usually seen". 'Das Monument Alexander III Leningrad' also exemplifies the compositional devices that were being developed by Ignatovich, Rodchenko, Langman, Petrusov and their contemporaries: using dramatically tilted angles to order the photographic compositions, making the image of a static statue dynamic and exciting. The close distance to the statue also distorts its size, making it even more monumental and powerful. This distorted perspective was developed from the technique known as 'ostranenie' (alienation), which prevented the viewer from empathising with the subject, hoping thus to distance the viewer and produce a new response.